Her Cowboy’s Promise by Jennifer Hoopes 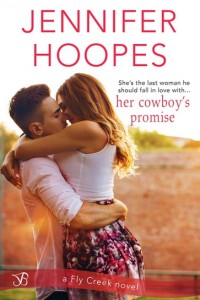 Emily ran away to a small town to get away from her problems. She spent three years in isolation which is hard in a town where everyone knows everything and everyone. After looking into the eyes of the new cowboy in town, Emily finds herself slipping out of her bubble.

Unless you confront your problems head on they will follow you wherever you go.

The two main leads Adam and Emily only described there connection as on of lust. Though they didn’t act on it they did mention it often. So it was very hard to see love when they made it seem lust driven. I also find it hard to believe that if Adam and Drew were so close than why hadn’t Emily and Adam met before. I also kind of feel bad that Drew actually died. I know that it worked better for Adam and Emily to be together. I think Drew’s character should have stayed alive.

The best part of the story to me were everyone else except the two leads. I think the surrounding characters helped the small town romance blossom. The smart strong women figures were good for Emily to see.

This story was original. It was something I never seen coming. I would not have guessed what Adam’s secret was. I think that the ending wrapped up way to easy and way to quick. I was just waiting for Emily to know the truth and I kind of guessed how she would find out. The story had the potential to be so much more. I gave the book 3/5 stars. I think there was so much more that could have been done to emit love. The story line was there but the love was not.