Diving Into to Trouble by Shona Husk 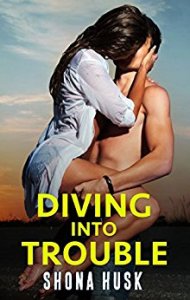 Two strangers who feel a pull of attraction actually end up going down the same road in life. Kurt is a cook in the Navy and is schedule to ship out soon. Rainy is trying to get her dolphins and is focused on not letting anything get in her way. When the two meet at a bar, they agree to a one night stand. When they find out they are set to be on the same boat thing get complicated. Or at least they make them complicated.

Rainy is broken from her last long distance relationship and has no idea how to proceed. Kurt has no one and for a long time that had been ok. Until Rainy walked in and now he couldn’t get her off his mind.

The characters didn’t pull anything out of each other. Besides the lust I found it hard to give into the love plot. Yes Rainy listened to Kurt but any of his friends could have done that. I didn’t connect to any of the characters. I think that we at least should have been able to find out how his best friend was doing.

I like that in the end there was an uncomplicated solution. I like the way the squad took up for Kurt. They in the end were his true family and it was sweet.

This story had so many layers. There were family drama and friend problems. Kurt was a good friend and he deserved more in his life. He found that in Rainy. Rainy had family but she had a hard time with trust. They both tested each other and it was a benefit. While the story had elements to be good it was just lacking a climax. It stayed at one level. There was lust and figuring out whats right and wrong. I gave the book 3/5 stars.