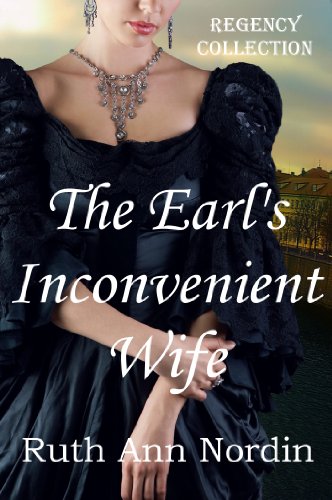 Want to read this book yourself? Well now you can. It’s free on Amazon. Here’s the link.  https://www.amazon.com/Earls-Inconvenient-Wife-Marriage-Scandal-ebook/dp/B0084JC6QU/ref=sr_1_1?s=digital-text&ie=UTF8&qid=1470718753&sr=1-1&keywords=the+earls+inconvenient+wife#navbar

I found this book by scrolling through the free kindle books. I had just found out that you could get free books. So of course I started adding everything to my virtual shelf. After a while, I figured out if you put the word “free” in front of a genre you can filter out the books you don’t want. So of course I put ” free historical romance” and I came of with many books, including this one. Based on the cover and title this seemed to be my kind of book. So here I am months later finally reading the book. Book lovers, you know how it is when you want to fill up your shelves with more books, but your reading isn’t fast enough to catch up with your greedy eyes.

So this weekend I couldn’t figure out what I wanted to read next. So I scanned my kindle list and this book stood out to me. I looked it up on good reads and it had a some iffy reviews. So I wasn’t expecting much.

Being a hopeless romantic I was pulled in by the first page. I could tell where the story was going right away. I don’t usually get bored with obvious books. So the story starts off in the point of view of the Earl, Nate.  ( I love stories with two points of views, instead of it always being in the girls point of view.) Nate’s brother just died leaving him with a title, and the need to create an heir. So he is prepared to start his first season. The season is something like the bachelor pad. Where single guys and girls come to a ball in order to find a match. He’s not looking forward to it but he knows it must be done.

At the same time Clair Lowell is also at the season for the first time. She is very nervous, unlike her sister who is ready to meet men with titles. After so many men forced upon her by her parents, she takes a break outside by herself. Nate sees her and tries to help but she falls and thanks to her own father he turns it into a scandal. This part of the book really looses me. Its all very rushed. Basically to avoid a scandal Nate agrees to marry Clair that next week. Neither person wants it but her family think it’s best.

This is leads to the basis of the book. Nate believes that Claire and her family set him up that night to get a titled man. Claire is sad that she has been ripped from her family and thrown into a man who will never love her. Both are look forward to producing an  heir so they won’t have to deal with each other. The only problem is they are too angry with each other to have sex. During their many fights they both learn things about each other. Nate finally believes his wife didn’t set him up, and allows himself to open up to her. Claire forgives Nate and begins to fall for her husband. This story has its funny moments, which I enjoy. It also has some sexual scenes but its not terrible. I think it was done well.

I gave this book 5/5 stars. I really loved it. I can say this is why I love historical romance. I’m so glad there was no magical element to it that always seems to come with this genre. I would say if your picky about historical facts and accuracy then you probably won’t want to read this. This book focus on the story and the time period is just the background. There are other side stories involving the sister’s maturity. Also Nate’s best friend who is so nice is unable to find a wife due to his limp. I looked at the other books in the series and there will be a story for him.

I can’t wait to read the next books in the series. I really enjoyed this story and will probably read it again once I get the other books. Let me know if you have ever read this book or if you know any others like it. Comment down below any thoughts.