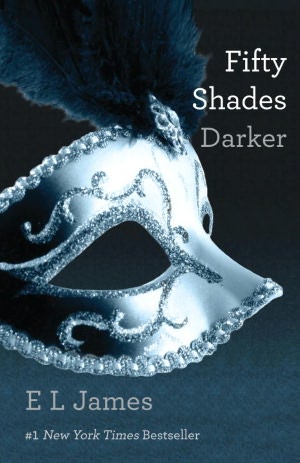 After finishing fifty shades of grey. I was eager to get into the next book. I was hoping Ana would be able to break from Mr.Grey. The book starts a few weeks after the last book. Ana is unhealthy and crying herself to sleep.  Unfortunatly for me Ana gave back into Grey by page 23. At this point the book is not looking good for me. More of Anas point of view with wrong descions. So to add a new level to the book we are introduced to a new character. Christians old sub! We also deal alot more with Mrs. Robinson. In this second installment Christian has decided he wants to throw out the rule book. He want Ana any way he can take her. In this case as his girlfriend. Which includes moving in with him. With Grey’s skeletons hiding around every corner it won’t be so easy for Ana. I can only assume fifty shades darker refers to all of Christians past. He opens himself up all the way to Ana. So much that he finally confesses his love for her. by page 300 you might just be rooting for their love, unless you think being engagaed is to fast. Yessss I said it engagement! E. L James sends us on another roller coaster of emotions. Yes its just as sexy as the last but its so much better. That being said I was willing to give this book a 5/5 stars. Until the last pages!!!!! So were at this beautiful ending sort of an happily ever after. Cut to Christians point of view of himself drunk smoking a cigar, recounting his security Taylor kicking him in the ribs!!! All while yelling don’t ever put your hands on Ms. Stelle again. Now hes plotting his revenge. ALL I CAN SAY IS WHAT THE FUCK!!! WHEN ALL WAS GOOD HOW CAN YOU JUST RUIN THE BOOK LIKE THAT. WHY COULDNT YOU ALLOW THE READER TO THINK THEY WERE HAPPY UNTIL THE NEXT BOOK. NOW IM WORRIED ABOUT ANA. WORRIED ABOUT TAYLOR. WONDERING WHAT DID ANA DO. ALL WHILE BEING EXCITED THAT MAYBE THIS LAST BOOK WILL BE IN CHRISTIANS POINT OF VIEW!!  I GAVE IT 4/5 STARS. SMH